A Glimpse Into Total Freedom

A Glimpse into Total Freedom
Explorations into Freedom Intensive Retreat
June 19 – 26, 2022, Sunday to Sunday
One of the supreme gifts Krishnamurti gave us was his insistence that we can gather together to inquire and probe into the operation of our current human consciousness in order to see for ourselves how the content of our consciousness, the beliefs, concepts and ideas we carry from one day to the next, shapes our perception of ourselves and the world around us. Krishnamurti pointed out that once our minds have been conditioned to live in fear and conflict, we will ultimately and subconsciously accept a sense of perceptual limitation.
Richard Waxberg and Deborah Kerner have been facilitating dialogues for 17 years for the Krishnamurti Foundation of America, based on Krishnamurti’s profound insights that a spiritual life can effectively begin by exposing the entire operation of our human consciousness, including the perception-shaping mechanisms of the subconscious. And that if a group of serious-minded people are willing to explore together in an atmosphere of mutual trust, affection and sensitivity, there exists the potential to discover for ourselves that the mind can free itself of its psychological burdens, so that a new mind free of the past, a mind that is fresh, fully alive and clear, can begin to flower.
During the 8-day Explorations into Freedom Retreat, Richard and Deborah enter into deep explorations with participants 3 times each day to discover what is preventing a rebirth of the mind. Their work helps make clear that any spiritual journey into understanding the nature of the self, can first begin with examining beliefs and distortions in our thinking, laying the ground for new life-changing insights.
Krishnamurti felt that shared inquiry is a true form of meditation. Richard and Deborah emphasize that at the heart of this form of meditation is an exchange of energy, a gathering of energy created by sharing our insights together, and at the same time releasing psychic energy trapped in fear and resistance. Our shared inquiries give us the freedom to discover that when trapped energy is released, there is the potential for energy to flow unimpeded by ‘time-bound’ limitations, potentially freeing us of the need to hold onto the past or project arrivals into the future, free to be ‘present’ without resistance or conflict.
Krishnamurti made clear that his life was dedicated to freeing humanity of psychological suffering, to help all of us step out of the old, dead patterns of thinking that have led us to this impasse, a crisis of fear that has undermined our capacity to love, and to act from love. But first, in order to begin a new spiritual life with a renewed sensitivity to the perception of the incandescent energy of love that permeates all of life, we must be willing to look at the operation of our current ‘me-centered’ consciousness; to see how it dampens, distorts and limits our capacity to perceive love as the very essence of our being. Once that ‘seeing’ takes place, a new freedom can flower, freeing us from the authority of the known.
During the Retreat, Richard and Deborah encourage participants to discover the penetrating awareness of ‘listening and seeing’ as an open door to a new timeless and boundless perceptual dimension.
Anyone interested in exploring for themselves the possibility of freedom beyond psychological suffering, who has a longing to live in freedom, or who is curious to probe into the potential of freeing the mind in order to discover what awaits us on the other side of fear and conflict, should consider joining Richard and Deborah for their June Explorations into Freedom Intensive Retreat, A Glimpse into Total Freedom. The Retreat takes place at the beautiful, mountain-ringed Krishnamurti Center campus, nestled in the spiritually alive Ojai Valley in California.
Richard and Deborah limit their Intensive Retreats to 12 participants to help create an atmosphere of mutual support, affection, respect and sensitivity, as we journey together toward the birth of a new mind.
Facilitators 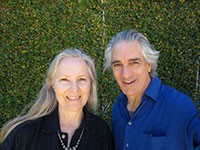 Richard Waxberg and Deborah Kerner live in Ojai, California. They moved here 17 years ago by invitation to create and begin facilitating the Explorations into Freedom Intensive Retreats for the Krishnamurti Foundation of America. They offer two 8-day retreats each year at the Krishnamurti Center in Ojai, in June and October. They have also facilitated retreats in British Columbia, Canada and in Denmark.
They are both practicing artists. Richard studies and plays the Japanese Shakuhachi flute. Deborah is also a published poet. Both Richard and Deborah had successful careers in New York City as graphic designers. Richard taught art and design, aesthetics and art history at the prestigious Parsons School of Design.
They left their lives in New York City to begin a new spiritual life, taking up the challenge Krishnamurti proposed of stepping ‘out of time’, stepping out of the ‘me-centered’ paradigm of consciousness. Their journey took them to Ojai, California to study Krishnamurti’s teachings, and to India to teach for a full school year several art and design courses at the Rishi Valley School in rural Andra Pradesh, a school based on Krishnamurti’s teachings located near his birthplace.
During their year of teaching at the Rishi Valley School, Richard and Deborah traveled to 4 Krishnamurti schools throughout India, to participate in dialogues with teachers and staff on what it means for students to experience an education based on Krishnamurti’s teachings.
As part of their earlier spiritual work, they studied Native American shamanic practices for 12 years with 3 traditional Native American elders before discovering the profound life-changing teachings of J.Krishnamurti. It was during these studies that they learned the importance of gathering, storing and releasing energy as an essential part of spiritually transformational work.
They continue studying and exploring current scientific studies and observations on human consciousness that reflect Krishnamurti’s profound message of transformation, freedom, and love.